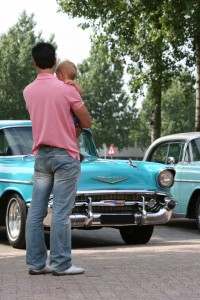 The Subaru had been the oldest member of my newly formed family, having entered my life shortly after it came off the production line. It was an ocean blue vehicle with a hood scoop and was commonly known for being the type of vehicle used as a rally car throughout the world. I loved that car, and it was certainly a part of my family. In 2006 I met my wife, taking the Impreza on our first date, and that same car drove me to the church on our wedding day, and the car delivered my son from the hospital the day after he was born. While there is no doubt that I love my wife and son infinitely more than that car, the Subaru still holds an important symbolic meaning in my life.

One of the happiest days of my life is when my son, who was at this point five years old, came out and wanted to help me change the Subaru’s oil. While my initial reaction was to tell him no as it was potentially a messy job, I ended up thinking it through and quickly agreed, and went inside to get him some “work clothes” on. When he emerged, I taught him about what oil does in a car, and he helped me with the pump to extract the oil (we use an over the top oil extractor). After that, he held a bag as I removed the filter and placed it inside, where I then smudged a bit of dirty oil on his nose as a joke.

This was a great bonding moment for us, and it also gave him a great understanding about how cars and tools work. In the years that have since passed, he has stepped up to help me with other projects on the Subaru, which include changing the air filter, replacing the brakes and rotors, and even replacing spark plugs (the kid has a real talent for threading in the plugs). These moments are touching, and I believe they have guided him to want to pursue a career in a STEM related field, as he wants to be a car engineer like his grandpa.

Doing projects like these while also merging in other educational pieces like our Car Video have definitely given my son an edge when it comes to mechanical understanding, and doing it with him has certainly helped bring us closer together.

After every one of our projects my son and I end up taking the Impreza out for an ice cream. Even after nearly 15 years, the Subaru is still going strong, even with more than 300,000 miles on it, and there is a very real possibility that the vehicle will last until Connor starts driving himself.

The moral of this story is to make sure you take the time to do little projects with your child, as you are giving them an important education, and spending time with your little one makes them feel important and loved, which in of itself is priceless.

Have you had the opportunity to do a special project with your son or daughter that has brought you closer together? If so, please feel free to share in the comments below.